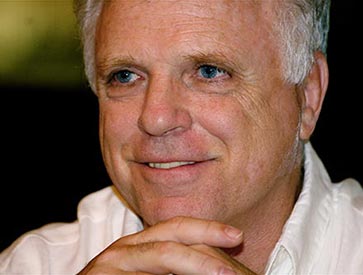 I was born in Long Island, New York, 1944, as a fourth child five minutes older than my twin brother. My mom was a nurse, and my dad an insurance salesman with the voice of an opera star.

Growing up, I was surrounded by many powerful women who greatly impacted my future. As a young man I formed a vision that drove me all my life: “A great family and enough money so that nobody can pull my strings.” That vision was so powerful I knew I could make it come true.

With a “C+ average,” I received a full scholarship to Denver University, Colorado, because of the letter I wrote describing my future. I graduated with an MBA and a lot of As, then started working for an international accounting firm as auditor and financial consultant. At the same time I married my first wife, Kathi, and soon afterwards my two lovely daughters, Shannon and Chimene, were born. At 26, my family and I moved across the country to Washington where I ran my first business, an oyster and clam farming company that utilized leading edge aquaculture.

A few years later my family settled in Silicon Valley, California. I enhanced my knowledge of visions as a manager and entrepreneur with companies on the leading edge of technology in semiconductors, microcomputers, video games and biotechnology. Later I co-founded Hickey & Hill, a well-known crisis management firm specializing in restructuring small to medium sized companies.

At the peak of my career, at 48, I decided to retire from business. I was burned out from hard work, and frustrated with the frenetic pace and turmoil in my personal life. Also, my vision now required balance between a man who worked hard to raise a family and make money, and a traveler’s personality deep inside who wanted no strings at all to follow my heart.

I decided to trade my Mercedes for a backpack and travel the world for one year, seeking knowledge and hoping to change my controlling business personality and come back to live in mellow satisfaction with life.

I continued to travel extensively to exotic places for many years, and worked part-time as a crisis manager. I transferred journey notes from paper to computer and wrote the Breaking Free Series. Though a financial mind, I had been writing diaries since my early twenties.

While living in San Francisco, I took writing lessons from Clive Matson, a beat generation poet, and an excellent writing teacher. In 1997 I was a non-fiction finalist at the Pacific Northwest Writers’ Conference Literary Contest with the first two chapters of Doorway To a Dream (now Breaking Free Series). I was the only male finalist among nine other women.

My Breaking Free Series is a zesty travel adventure woven around a journey of personal discovery and transformation. Travel gave me a unique perspective to reflect on my family, and myself as a man and individual.

In 2003 I married Malgosia, the woman I met in Siberia during my trip around the world. We now live in Warsaw, Poland with our adorable five year old son, Sean.

Though divorced, my both families meet regularly and enjoy their time together. And, they are all travelers.

I will have more books coming, since I have plenty of ideas to talk about.