By breakingfree on June 7, 2016 in Uncategorized 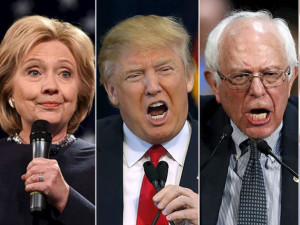 $19 trillion in U.S. government debt Is the dinosaur in the room during upcoming presidential elections.

So what are the prime candidates saying about this dinosaur in the room.

What does 19 trillion in debt mean?

Older people receive little interest income on their life savings, forcing them to invest in an overvalued stocks and real estate.

The youth of America, in their lifetime, will either pay back a large share of this rapidly rising debt or eventually face a cataclysmic event affecting their way of life.

How did debt get to this stage? Before the twentieth century government was not expected to pay for education, housing, feeding the poor and indigent, medical, large public works, supplementing income etc. Wars needed to be paid out of pillage or taxes,.

Starting post Vietnam war, we accepted large deficits rather than sacrifice to balance the budget. We charged on a government credit card. Then, out of the University of Chicago came a dandy financial philosophy that if we lower taxes the savings will trickle down to the average person resulting in higher income and more total tax revenue. Thus fortified with that wisdom, we credit-charged budget deficits and didn’t save for the retirement of boomers. We continue to live beyond our means.

Politicians fear balancing the budget because groups compromised will not vote for them.

What can we do about it? Starting with presidential debates, let’s make sure candidates and our representatives in congress and senate address this dinosaur before it devours us. The banner: live within our means and balance the budget.

Don’t let candidates get away with flimsy rhetoric that addresses flimsy issues. Ask about the $19 billion now!

balance
Another look at family vs individual