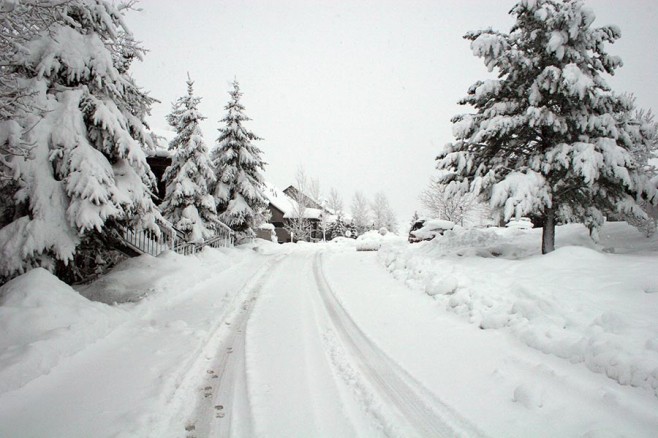 After the short one day visit to the in-laws, I rented a car and drove three hours to Frank Zolfo’s in Kinnelon, New Jersey. The storm had temporarily abated. Flurries and calm. Alerts were out for the next day.

When I arrived at Franks, we had a delightful dinner talking about my upcoming travels. I went to bed secure in the knowledge that I was safe from the storm. Then at 4:30 in the morning Frank woke me from my cozy slumber. “You have to get up and drive out to Long Island to save your mom.”

“The storm is starting up. The news says it’s going to be the worst blizzard this century. There’s been flooding. You need to be with her.”

“But my mom is better equipped than I am to weather a storm. Believe me, these things don’t faze her. Besides, she’s got my brother. I’ll be driving in this shit.”

It’s not that I didn’t want to help mom, but she’s pioneering stock. She doesn’t worry about things like storms. Besides her house is well above the high water mark and hadn’t ever been touched by tidal action.

So after a hot breakfast, at 5:30 AM, I was on the road, driving through lashing snow, a prelude to the real Blizzard of 93, wondering how come Frank was up so early. The whole way, about 100 miles, I barely managed to stay ahead of the storm. That doesn’t mean the weather was good. It snowed the entire way, just not blizzard. My hope was that the car would not slide into a ditch or worse.

Then I was pulling into the driveway and parking.

“Oh hello dear,” she said as I opened the door to the house shaking off snow. “I didn’t expect you so early. What dreadful weather!”

That was it. In the afternoon the storm hit full force.

At about 11PM my brother, Dan, and I walked outside fighting the elements. I am one of those people that love storms. I like the power of wind and the impact of blowing snow. Blizzards are terrific, but hurricanes are my favorite. My mom lived on an acre of property off a small creek that fed into the Great South Bay on Long Island. Surveying the storm, Dan and I noticed the water had come within thirty feet of the house but had receded leaving debris on its way out. Having grown up here, we were both familiar with tidal flows.

At around midnight, to our surprise, fire engines and firemen arrived to evacuate us.

“Haven’t you listened to the news?”

They told us the news media had been broadcasting evacuations to protect against flooding. They decided to take the initiative.

“The tide is going out.” Dan said. I wouldn’t worry for at least eight hours.”

It turns out, that in their haste to provide safety, the fire department had neglected to check the tide tables. They looked a little confused, said maybe they would see us in the morning. Mom offered coffee but they left. To their defense, the fire department was mostly volunteers and the pressure from news media to evacuate was immense. The storm, by the way, was a moderate to bad blizzard. Certainly not the worst of the century as billed. It was severe enough, however, to cause major damage, especially if you happened to have a home on the barrier island that protected Long Island from the ocean – Fire Island it’s called.